Agustín's Funeral will be Thursday 19th April at 10:00 at Aldershot Crematorium. There's no Wake.

He requested no flowers for the funeral but if people wished to make a donation to the British Heart Foundation/Association then that would be great.

Here is a link to one of the pieces of music that will be played. It's called Agur Jaunak and you can listen to it at: www.youtube.com/watch?v=6JjHBmwQjRw

My Dad (Nire Aita), Agustín Luís Eskubi Urtiaga was born in Durango, Bizkaia, Euskal Herria but passed away in the country of his adoption, i.e. the UK in Farnborough, Hampshire. 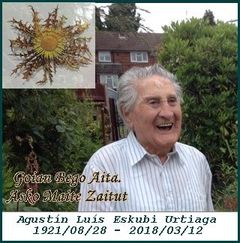 He was a cheerful chap, always willing to lend a helping hand and a born survivor, despite living the bombing of his hometown Durango, as a young teen when the town church Santa María de Ulibarri was crushed under the bombs and he had to help get the bodies out, not just the survivors.

He came to the UK on the Habana, because Amama Juana wanted him to look after his little brother Nikolas and his young cousins (Nati, MariCar and Txiki), so he wouldn't follow in the footsteps of his elder brother Juan fighting against Franco's army and ending up in front of a firing squad or in prison like Aitite Nikolas.

He was what the Americans would call a self-made man. His first language was Euskera (Basque) and his Euskalki (dialect) "Bizkaiera", followed by Spanish and finally English in order to survive and earn a living. Fortunately, he was taken in by the Pat and Muriel Osborne, who treated him as one of their own, not just giving him a roof over his head and food on his plate but as one of the family.

He eventually met and married my mother Olga, and I, Juanita am the result of that union.

In his later years, he took up golf and became pretty good at it, and won the title of veteran golf champion several times at his local golf club. He was also a fond gardener, with roses being his favourite flower, so much so, that he had over 40 varieties in his garden.

Sadly, his life came to an end in the early hours of Monday 12th March 2018; however, he was fortunate enough to pass while sleeping without pain or suffering.