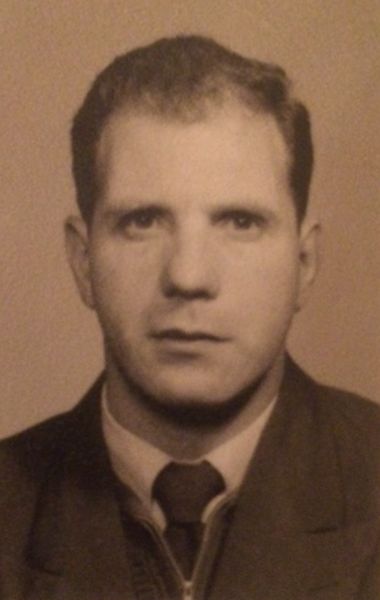 José passed away peacefully in his sleep on Tuesday the 8th of November as result of complications due to Parkinson's disease. He was still in Barnet General Hospital where he had been since 10th of September.

His funeral was held at Garston Crematorium, Watford on Friday 25th November 2016 at 1:20.

Eulogy given by Fr Stephan Chrysostomou
of
St Mary the Virgin and All Saints, Potters Bar


The story of José’s life is one of the most poignant, most dramatic and most moving that I have ever had the honour of hearing and I am thankful to his family for sharing it with me. I am sure many aspects of it will be familiar to many of you here, but it is a tale worth telling. Any factual errors in what I say are of course my own.

José was born on the 26th of June 1926 in the district of Otxarkoaga, on the outskirts of Bilbao,
the oldest of five children to be born to Valeriano and María Concepción.

His earliest years were ones of safety, but the outbreak of the Civil War in 1936 and the rise of General Franco brought significant danger for the family due to the Franco regime’s hatred of the Basque people.

After the bombing of Guernica and the threat that Bilbao could be next Jose’s parents began to fear for the lives and futures of their children, so they took the difficult decision to send José and his younger brother Ramón to England on the Habana, which docked at Southampton on the 23rd May 1937 carrying nearly 4000 children, known to history as "los ninos" the children, including the 10 year old José and five year old Ramón.

They had left behind their parents and new-born baby brother Joseban. Their move to the UK was supposed to be "solo por tres meses", only for three months, but due to a catalogue of difficulties and the eventual fleeing of their parents to France to escape persecution, the two brothers would never see their parents again. Nor would they know their two little sisters, María Concepción and Isabel, who were born after the boys arrived in England and who died in childhood.

In England José and Ramón were given English names, Joe and Ray, but the change of name was only a small part of the process of making England their new home. In those early years it was a challenge for the children to settle down and accept their fate, as they were frequently being moved from colony to colony and home to home.

Joe and Ray, as they became known to most, spent time in colonies at Hull, Morton Banks Scarborough and Durham, and as bad as things got Joe did his best to look after his little brother. But more tragedy followed when the two brothers were separated by the flawed system, with Ray remaining in Hull while Joe was sent to live at Rowley Lodge in Barnet to start work. I can only imagine how difficult this must have been for them both.

In 1942 Joe was sent to William Baker School Goldings, Hertford, where he learnt engineering. The move was a punishment for, in Joe’s own words "being a good boy." It was a tough home, run along strict military lines, but Joe learnt a lot there and enjoyed the sports opportunities, becoming captain of the football team and taking other younger boys under his wing. Nonetheless, one of his abiding memories of William Baker was being always hungry.

After this Joe moved to Finsbury Park and started up his trade as a car mechanic. It was there that Joe and Ray were reunited after Ray was sent down from Hull to London for work, a happy reunion. Joe worked in successive garages in Finsbury Park, then Southgate, then Finchley.

However it was in Wood Green, at the home of Ethel and William Meakins, affectionately referred to by Joe as "Ma and Pa" that Joe finally felt like he had a permanent home and a family unit he could live with and belong to. Ma and Pa’s daughter Doris and her husband Bob became lifelong friends, and it was through his friendship with them that Joe would meet his future wife Pamela, at the roller skating rink at Alexandra Palace.

It was while courting in 1969 that Joe and Pamela went on a holiday to Bilbao, hoping to trace some of Joe’s family. In his parent’s old village, Joe was by chance spotted by an old woman who had known his family. Amazingly, she immediately recognised the much older José despite having last seen him as a 10 year old boy over thirty years earlier!

Thanks to her information, José was able to find his baby brother Joseban, now a man in his thirties with a wife Ana María and two children of his own, José and Kontxi. This was the start of a much delayed and joyful family reunion, and the beginning of many trips back home to Bilbao.

José and Pamela married in 1971 and had a loving and happy marriage. Two sons were born to them, Matthew and Andrew, and they enjoyed many trips to Spain and elsewhere as a family.

Sadly, tragedy struck again when Pamela contracted cancer and died in 1983, after only twelve years of marriage and with Matt and Andy only 10 and 7. The family were devastated, but Joe was a strong and determined man, and he was dedicated to caring for his boys and making sure they grew up right.

He was "father, mother, cleaner, chief cook and bottle washer", and took all these jobs and more in his stride. He could be strict and their home on Elmscroft Gardens was one of discipline. Joe was immensely house proud, and woe betide you if you broke something or messed it up! Yet underneath that tough exterior was a gentle and emotional man, soft and kind hearted.

Matt and Andy have always been thankful for their father, and each did all they could to care for him when as grown men they saw their father becoming more frail. Joe’s passion for Judo (of all things!) in his younger years brought some notable achievements but had taken its toll on his knees, with both needing to be replaced. Sadly these operations did little to help his increasing health problems, and it was after the second knee replacement in 2013 that Joe really began to go downhill.

Eventually Jose was diagnosed with Parkinsons and dementia. The boys did all they could to look after him, helped by the excellent care that other community carers provided, and one final happiness is that José lived long enough to begin to have a relationship with his granddaughters Imogen, Sofia and Hannah, who brought him much joy.

In September of this year, however, it was necessary for José to go in to hospital, where he was well looked after in Barnet for two months. He passed away peacefully in his sleep on the 8th November 2016, having lived to ninety years of age. I’ll let the last word be his: "I’ve had a hard life, but a good life."