We are delighted to announce that our three bids for grants made earlier this year to Gogora Instituto de la Memoria, la Convivencia y los Derechos Humanos Historica, have been successful. Details here …

"1936 was a turbulent time in Spain, with political upheaval descending into a brutal civil war. Michael begins an emotional rail journey, which takes him deep into his family’s past and reveals the tentacles of the regime which forced his father into exile."

There is an article in the Guardian commenting on the programme.

There is also an interesting article about Michael Portillo, his programme and his father in El País.

We have received this notice about recent changes at The Cañada Blanch Centre for Contemporary Spanish Studies, London School of Economics - now being re-established with new direction and emphasis …

Firing a Shot for Freedom, the memoirs of Frida Stewart

with foreword and afterword by Angela Jackson, author of British Women and the Spanish Civil War

Frida Stewart played in important role in the care of the Niños de la Guerra, both in Spain and in the UK.
It was she who collected and edited the songbook "Songs of the Basque Children".

Angela has also provided this article, which is also to be found in our Articles Section

The book is published by Clapton Press at £9.99. More details here …

Fundraising call for soundtrack album of The Typist

In 2015 we supported Kerieva McCormick with her Dance Theatre production "The Typist", which subsequently toured successfully with sell-out shows.

BCA'37 UK helped with research and background information, and several niños living in London gave their stories to Kerieva, contributing an important part to the narrative of the production. We now support Kerieva's crowdfunding for the production of the soundtrack album of "The Typist".

More information and details of the fundraising can be found here …

The story synopsis can be found here …

Did one of your family members, who came on the Habana in 1937, go onto serve in the armed forces during World War 2?

If so, you are invited to join the Fighting Basques Project in collaboration with BCA'37 UK.

An article in Spanish on the Havens East online exhibition was published recently (21 June 2020) in El Correo.
Read a copy here …

The Havens East Project's new, online exhibition will be live from 12 June 2020 at www.havenseast.org

"Havens East uncovers the incredible stories of the Basque child refugees who came to Norfolk and Cambridge during the Spanish Civil War (1936–1939)."

The government of Navarra, in agreement with several publishers, has released an online search tool focused on the events of 1936 in Navarre. The database in which the tool searches includes the Government archive and also all the books published about the topic.

You can search by name, last name, town, affiliation … The results include a capture of the book/article where that element is indicated, and a link to the Navarra's Public Library database.

The main project of Innovation and Human Rights is to compile an online central database of victims of the Spanish Civil War and the Franco regime. The database currently includes 700,000 records all supported with references to archives and/or research. It may be searched by name and surname. We publish everything in Spanish, Catalan and English. Click the logo for their web site.

"Expedición a Inglaterra" : The Basque Children in Britain

This blog item from the Asociación Innovación y Derechos Humanos is of particular relevance at this anniversary time.

In January we sadly announced the death of Herminio on 29th December 2019.

Maya, Herminio and Verena's daughter, has sent us the following article that appeared in Tiempo de Canarias. It was Herminio's last interview and was made on 15th December just two weeks before his death. The author Ángeles Arencibia is also a correspondent for El País. Read it here …

Spanish consulate to reopen in Manchester

In response to popular request from expats …

An extract from chapter 2, about Lucio Sauquillo, is copied here … (in Spanish and English).

From the same publishers, you can read an article about José María Irala here …
and an Enlish translation prepared by Lita Power here …
(Please refer to the original article on the web for the photographs)

See this call for participation in the project.

From the University of Southampton Special Collections

"Telling their stories" Basque refugee collections resources webpage, which draws on oral histories, manuscript memoirs, other testimonies and writings to develop a series telling the stories of the individuals in their own voices …"

*** Read the latest update here on the Havens East project which describes the revised project outcomes in light of the current situation. Of immediate relevance is the plan to produce a digital exhibition for June 2020.

In exciting news for BCA'37 UK, The Association for the UK Basque Children. Anglia Ruskin University (ARU) has received a National Lottery Heritage Fund grant of £54,600 to investigate the lost histories of child refugees who sought sanctuary in East Anglia during the Spanish Civil War. More information …

Dr Edward Packard, a trustee of the Association, is helping the project’s research in Norfolk.

More dates and details will be posted here when available.

In January we sadly announced the death of Herminio on 29th December 2019.

Maya, Herminio and Verena's daughter, has sent us the following article that appeared in Tiempo de Canarias. It was Herminio's last interview and was made on 15th December just two weeks before his death. The author Ángeles Arencibia is also a correspondent for El País. Read it here …

Melvyn Bragg and guests discuss Pablo Picasso's Guernica, which he painted in 1937 soon after the bombing of that Basque town in the Spanish Civil War, and its wider context.

From San Loretzo Dantza Taldea, who came to dance last year at Thaxted. Watch it here on YouTube … 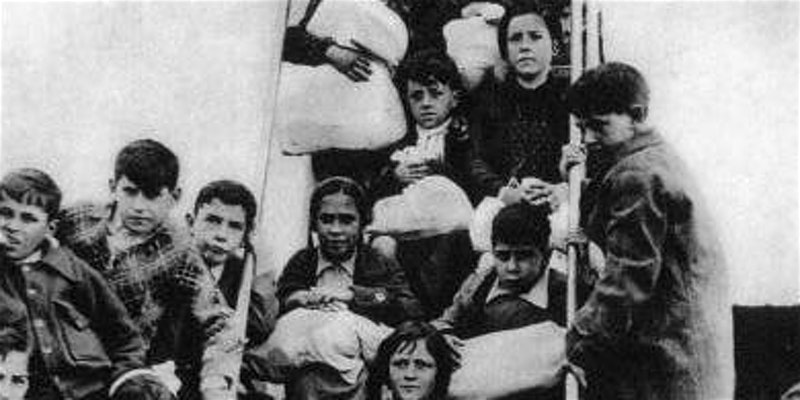 Conference jointly organised by the Cañada Blanch Centre for Contemporary Spanish Studies and the BCA'37 UK.

Humanitarianism and Politics in the Spanish Civil War

Watch this episode of 'Great British Railway Journeys' that visits Wherstead Park, Ipswich, and features Ed Packard, Paco Robles and Carmen Kilner. Available for a time on the BBC iPlayer [May not be available outside UK]

It is with the greatest sadness that we announce the death of Father Gregorio Arrien Berrojaetxebarria aged 83 in Amorebieta-Etxano on December 13th.

Has been awarded to: Joshua Burns of the University of Southampton

"The 'Basques' in Britain: An examination of refugee children's agency and identity formation through self-produced journals Amistad and Cambria House Journal"

Read the judges' comments here …   and the winning essay here …

We are sad to announce the death of Juanita Vaquer. We send our deepest condolences her family and friends.

The funeral will be held on Friday 24 January at 2.15pm at Breakspear Crematorium, Ruislip.

We are saddened to report the death of Narciso Lobato and send our deepest sympathies to his family and friends.

The funeral will be held on Monday 27th January at 1.45pm at Reading Crematorium. If you wish to attend, or for further details please contact Narciso's daughter, Ros, on 07801 323113.

The Peace Museum of Gernika, has published this resource, which could be of interest to Spanish teachers. More information here …

Although the niños de la guerra get only a brief mention, Lala Isla has always been one of our staunch supporters and so we think that this fascinating book and its launch (in Spanish) may be of interest to our readers. More details here …